Where Can I Fly My Drone?

Don’t get caught flying in restricted areas or you’ll be faced with some serious fines. Transportation Canada provides detailed and up-to-date information on where you can fly safely without penalty. We have collected and condensed some of the most important information you will need to ensure you are flying safely in non-restricted areas

DroneStripe Ltd. currently only provides UAV  information specific to Canada. We are currently collecting international UAV information which will be added to the site in future updates.

Prior to each flight, drone pilots must conduct a survey of the area and also consult: NOTAMs tell pilots about event and obstacles that may affect them. All NOTAMs include the time and location of the event. Enter the ID of an aerodrome near you into the NAV CANADA NOTAMs portal   to find NOTAMs in your area. Any chart that has aeronautical information relevant to the flight will do. This may include aeronautical charts   listed on the NAV CANADA website.

Drone pilots must get air traffic control approval for operations in controlled airspace. For airspace controlled by NAV CANADA, request a RPAS Flight Authorization  . For controlled airspace under the authority of the Minister of National Defence (MND), you must request a flight authorization from the appropriate aerodrome authorities, this information can be found in the Canada Flight Supplement (CFS)   or on the NRC Drone Site Selection Tool . To operate within controlled airspace, the pilot needs an advanced RPA pilot certificate  , a drone with the appropriate manufacturer safety declaration   and the air navigation service provider approval. Drone pilots must maintain communications with the air traffic control authority while flying. For more information on operations in controlled airspace, please visit section 3.4.4 of the RPA chapter of Transport Canada Aeronautical Information Manual (AIM)  .

Areas That Limit the Use of Drones

An aerodrome is anywhere that an aircraft can take off and land. This includes airports, heliports, and seaplane bases.

Unless you are following an established Transport Canada procedure, you cannot fly closer than:

Airport, water airport or heliports outside of controlled airspace

Drone operations within 3 nautical miles (5.6 kilometers) of an aerodrome under the authority of the MND require a Special Flight Operations Certificate   (SFOC) – RPAS. To be issued an SFOC-RPAS, the drone pilot must receive authorization from the MND aerodrome authorities.

For more information about these zones and how to properly access them, please consult the NRC Drone Site Selection tool   and section 3.2.35 of the RPA chapter of Transport Canada Aeronautical Information Manual (AIM)  .

Drone pilots are not allowed to take-off or land within a national park.

Drone pilots are not allowed to fly within the security perimeter of a police or first responder emergency operation, such as a traffic accident. You must also avoid sites near disasters (forest fires, floods, earthquakes). A drone flying near these areas may interfere with emergency personnel aircraft and the work of emergency personnel.

Drone pilots are not allowed to fly near or over advertised events, such as outdoor concerts and sporting events, unless they have a Special Flight Operations Certificate   that specifically allows them to do so.

Indoors, Near and Over Buildings

Part IX of the Canadian Aviation Regulations do not apply to indoor or underground drone operations. No matter where you fly, however, you must fly safely and always respect all other laws   so as not to pose dager to people or other aircraft. Before you fly indoors, or near or over buildings, we recommend getting permission from the building owner and/or occupants. 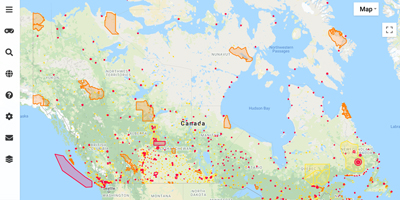 The National Research Council has created an interactive map that helps drone operators understand airspace and where to fly safely in Canada.
Open Map